Arunima Bhattacharya, Richard Hibbitt and Laura Scuriatti are co-editing a volume of essays entitled Literary Capitals in the Long Nineteenth Century: Spaces beyond the Centres, to be published by Palgrave in their Literary Urban Studies series in 2022.

Emily Eels contributed an article on Natalie Clifford Barney in the special issue of Comparative Critical Studies on “Life Writing and the Transnational”, edited by Sandra Mayer and Clément Dessy. She co-organised and chaired a session on March 24th, CREA Literature seminar at University of Paris Nanterre,  in which Stefano Evangelista presented his book with Prof Cornelius Crowley as respondent

In addition, she is on the scientific committee, together with Laura Scuriatti, of the conference on the Materiality of Modernisms  : https://cems2022.weebly.com/

While literary scholars and historians often draw on the press as a source of information, First World War periodicals have rarely been studied as cultural artefacts in their own right. However, as this volume shows, the press not only played a vital role in the conflict, but also underwent significant changes due to the war. This Companion brings together leading and emerging scholars from various fields to reassess the role and function of the periodical press during the so-called ‘Greater War’. It pays specific attention to the global aspects of the war, as well as to different types of periodicals that existed during the conflict, ranging from trench, hospital and camp journals to popular newspapers, children’s magazines and avant-garde journals in various national and cultural contexts.

Modernist Literature and European Identity examines how European and non-European authors debated the idea of Europe in the first half of the twentieth century. It shifts the focus from European modernism to modernist Europe and shows how the notion of Europe was constructed in a variety of modernist texts. Authors such as Ford Madox Ford, T. S. Eliot, Gertrude Stein, Aimé Césaire, and Nancy Cunard each developed their own notion of Europe. They engaged in transnational networks and experimented with new forms of writing, supporting or challenging a European ideal. Building on insights gained from global modernism and network theory, this book suggests that rather than defining Europe through a set of core principles, we may also regard it as an open or weak construct, a crossroads where different authors and views converged and collided.

In their co-edited book “Happy in Berlin? English Writers in the City, the 1920s and Beyond” Stefano Evangelista and Gesa Stedman explore the different reasons for Britons travelling or living in Berlin in the early 20th century. Specially commissioned chapters from colleagues on film, psychoanalysis, sexology, politics, and the fate of Weimar Berlin in contemporary post-Brexit Britain complete the richly illustrated book which accompanied the exhibition of the same title. For more details of the project, visit the project website: link to the website https://www.happy-in-berlin.org. 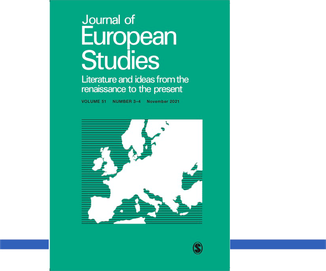 The special issue of the Journal of European Studies, based on the DFG-funded conference Writing Europe 1918 – Writing Europe 2018 which took place in Berlin in 2018, has recently been published. In their wide-ranging papers, members of the network and guests explore the rebuilding of literary/artistic networks after World War I. The detailed table of contents can be found here: link to journal website: https://journals.sagepub.com/toc/jesa/51/3-4

The Centre for British Studies and The Oxford Centre for the Humanities (TORCH) have co-organised an international conference on the aftermath of World War I and how writers and artists responded to the challenge of re-imagining Europe and re-building networks.

The conference will begin with a public reading on 26 September 2018, 6.15pm, with authors from Russia, Germany, France, and England reading from classic early-20th-century texts as well as from their own work.

The updated conference programme can be found here: https://www.gbz.hu-berlin.de/

edited by Gesa Stedman and Sandra van Lente, is a provocative and timely collection that looks at the troubled present and future of Britain in the EU from the point of view of the arts and cultural sector. It includes contributions from some of the network members.